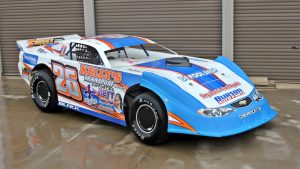 Sean Black has won a thrilling Super Sedan Feature race at the Maryborough Speedway on Sunday night, as part of the venues 60th Anniversary meeting, which was also round thirteen of the Brims Concrete Super Sedan Series, supported by Think Money and McCosker Contracting.

Justin Randall and Dale Christensen would start on the front row for the thirty lap main event, with Leigh Williams and Sean Black starting on the second row.

Christensen would get the best of the start, leading Randall and Williams through the opening laps, before Sean Black made a very quick ascension to the lead, passing Williams, Randall and Christensen in the space of three laps to take the lead.

Both Williams and Christensen would retire prior to the race reaching the half way mark, as Black was forced to fight of the imminent challenge firstly of Kyall Fisher, and in the concluding stages by Wayne Randall and Justin Randall. The Randall duo tried everything to pass Black, with the trio separated by just 0.595 after thirty laps, with Black winning by half a car length over Wayne Randall, with the same margin back to Justin Randall in third.

Bob McCosker, Brendan Doyle and Mark Pagel would round out the top six.

For Black, it continues a good season after finishing on the podium at the National Title, collecting his third Feature win of the season.