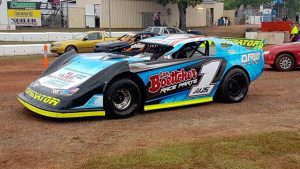 Rain ultimately would be the winner on the opening night of the Brims Concrete Super Sedan Series, supported by Barnes Drilling at the Ian Boettcher Race Parts, Kingaroy Speedway, but not before National Champion Darren Kane fired an ominous warning to his opposition.

Later in the night, Kane set a new one lap track record in heat four, setting a new bench mark with a staggering 14.177.

After six qualifying heats, Kane would be the highest pointscorer on a very even night of competition, which would see six different winners from the six heats.  Despite not winning a heat, Kyall Fisher would finish in the top three in all three of his heats, to be the second highest qualifier, while Leigh Williams and Tasmanian Steve Latham would finish third and fourth on the point standings after six heats.

The forty lap A Main was just four laps in, when rain started falling and officials deemed it too dangerous to continue.

Earlier, Leigh Williams won the opening heat after starting from position three. Tania Smith made a welcome return to racing, finishing second, while Darren Kane, who started from the fifth row of the grid, made his way to third with two laps remaining, finishing right behind Smith, but Williams won comfortably.

Sean Black was too good in heat two, leading all the way. Kyall Fisher would finish clear in second and Steve Latham finished third.  Mat Pascoe was the only driver to move forward in the heat, starting on row five, before finishing fifth, setting the quickest lap of the race in the process.

Heat three would see Wayne Randall lead early, but Steve Latham took the lead mid race to take the win. Kyall Fisher was impressive, coming from the back of the field to finish second ahead of Craig Craft.

Gavin Northfield would take heat four in a close finish.  Northfield would lead all the way, with Leigh Williams and Justin Randall running second and third respectively through the first half of the race.   Darren Kane who started on row three, moved to third on lap seven, before moving to second on lap eight, setting sail out after Northfield.  He caught Northfield with a lap remaining, with Northfield winning by 0.442.  Kane meanwhile set a new track record in the process.

Heat five would see Mat Pascoe untroubled in taking the win, though it would not be so smooth for Craig Craft who retired after two laps, while in second, or Sean Black, who moved to second but ended seventh.  Ian Brims and the consistent Kyall Fisher filled the minor placings.

The final heat was all Darren Kane, winning by more than half a lap, in a highly dominant display.  Tania Smith would finish second, while Gavin Northfield would finish third.

Round two of the Brims Concrete Super Sedan Series will move to the Rockhampton Showgrounds, on Saturday, 4 November 2017.

A Main, 40 Laps: Washed out after four laps. Race declared a no race.