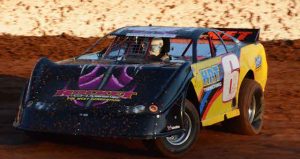 The Grand Final of the Brims Concrete Super Sedan Series supported by Think Investment Realty, came to a thrilling conclusion at the Corbets Group, Gympie Speedway on Saturday night, with Wayne Randall leading all the way to win the thirty lap main event.

After a couple of false starts with drivers spinning in the hair pin, including Sam Roza who started at the front of the field, the race finally got through the first lap on the third attempt.

Behind Randall, Justin Randall and Mark Pagel would swap positions several times before the next caution for Jack Childs who spun on turn two.

Wayne Randall upon the restart, opened a handy lead over Justin Randall, Mark Pagel, Matt Pascoe and Sean Black who all engaged in an excellent battle for second place.

The field would be bunched again when Sam Roza was stranded in turn two. Upon the resumption, Pascoe made his move with a great outside move at the top of the Mountain, moving right around the outside of Justin Randall, setting out after Wayne Randall.

With six laps remaining another stoppage occurred, this time for Brendan Doyle who spun in the hair pin, giving Pascoe an opportunity to take on Randall in the concluding stages. Randall would be having none of it though, showing excellent car speed, to win by three car lengths at the chequered flag.

Pascoe would just hold off Sean Black in a drag race to the line, while Mark Pagel would finish fourth, just 0.038 ahead of Justin Randall in a desperate finish.

For Randall, it was successive feature race wins in the series after taking the main event at Bundaberg three weeks ago.