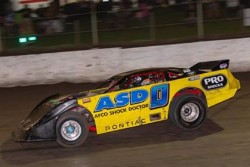 Justin Randall has won the second round of the Brims Concrete Super Sedan Series, supported by Ian Boettcher Race Parts and Suspension Warehouse, in a thrilling forty lap feature race which had three leaders and a blanket finish.

With the opening round totally washed out at Archerfield a week before, Saturday nights event at the Hi-Tec Oils, Toowoomba Speedway was effectively the first time most drivers have competed in the new season.

Trent Wilson and Ian Brims started on the front with Wilson leading Brims, Bob McCosker and Matty Pascoe through the first five laps. In the opening five laps, apart from a great race for the lead, Ed Doherty, Rodney Craft and Brendan Doyle all found themselves on the infield.

Pascoe would lead for the next sixteen laps, with multiple positional changes behind last seasons Series Champion, with Wilson and Brims swapping positions several times.

At the half way mark, Randall was still in sixth position, passing Darren Kane on lap twenty three to move to fifth, and quickly to third, passing Wilson and Sean Black, who after starting from position eight had moved to third, as the changes behind Pascoe continued.

On lap thirty, Randall took the lead, and over the final ten laps had to hold off several challenges from Pascoe, while right behind the duo, a three way battle for the final step on the podium, with Kane, Black and Wilson separated by literally a car length.

In a great final lap, Randall held off the a final challenge from Pascoe to win by a mere 0.349, while Wilson passed both Kane and Black on the final lap, with the trio were separated by just 0.314 in a thrilling finish which saw 1.385 seconds separating the top five.

Round three of the series will be held this Saturday night, at the Fraser Shores Maryborough Speedway.