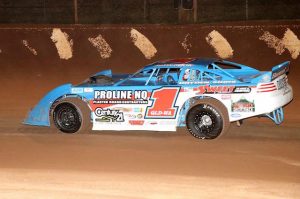 Matty Pascoe has crushed the opposition on the second night of the Super Sedan Summer Slam, at the Fraser Shores Maryborough Speedway, which doubles as round six of the Brims Concrete Super Sedan Series, supported by Think Money.

Pascoe and three times National Champion, Mick Nicola would start on the front row for the forty lap main event, with Nicola getting the all-important jump on a very slick race track, which made passing very hard to achieve.

Pascoe and Kane were all over Nicola through the opening ten laps, with the three drivers having eight National Titles between them, opening a gap on the remainder of the field, while the trio were separated by a mere 0.773.

Pascoe made the move under Nicola on lap eleven to take the lead, while a lap later Kane replicated the move, but unfortunately for Kane, a stoppage occurred, repositioning the order to the previously recorded lap. The stoppage was as a result of South Australian Ryan Alexander hitting an inside tyre bundle, while sitting in ninth place. Stewards were unable to apportion blame to anyone and as a result, Alexander restarted in ninth on the resultant restart.

From there, Pascoe simply drove away from the field leading by two seconds after just two laps from the stoppage, while Nicola was holding off Kane, Sean Black and Sam Roza.

At the half way mark, the lead was 5.500 seconds and growing by the lap, as Pascoe totally dominated proceedings. Pascoe was almost a second a lap faster than the opposition as the lead ballooned out to 10.2055 seconds on lap twenty seven, which would be the final stoppage of the race when Sam Grundy retired.

Within laps of the race resuming, Pascoe had again opened a commanding lead, (5.5 secs), while Nicola continued to have his hands full with Kane and Lachlan Onley who moved to fourth on lap twenty four.

Behind Pascoe, placings remained the same, close, yet processional. Matt Williams who was in seventh place throughout the race, made a mistake with five laps remaining, which cost him dearly, dropping to fifteenth.

Pascoe was simply too good, making amends for Thursday nights non-finish after a power steering hose blew while leading the event. The final margin of 10.702 was the biggest of the race, as he defeated Mick Nicola, Darren Kane, Lachlan Onley and Sean Black, with Pascoe now having won four of the five completed feature races in the Queensland series after the opening round was washed out.

Earlier, the nine heat races were won by nine different drivers, with Sean Black, Darren Kane and Callum Harper successful in the opening round, Steve Jordan, Lachlan Onley and Matty Pascoe won heats four, five and six respectively, while Ian Brims, Ryan Alexander and Mick Nicola would win the final qualifying heats. The heat of the night was the final heat, with the first five cars separated by just 1.5 seconds.

Round three of the four night series moves to Brisbanes, Archerfield Speedway.