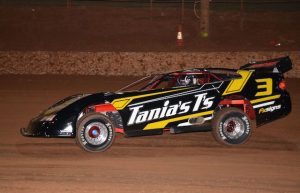 Round nine of the Brims Concrete Super Sedan Series, supported by Tanias Ts, crosses the border into New South Wales, with the Castrol Edge Lismore Speedway hosting their first round of the series.

After the success of the Super Sedan Summer Slam, the series is minus all interstate competitors, which is not going to worry Matty Pascoe, who won three of the four rounds, and will be the driver to beat again on Saturday night at the Showground venue.

Wayne Randall is also in the field, and after having produced one of the moves of the series to grab second place on the final lap at the last round at Toowoomba, will be a strong contender on Saturday night.

Steve Jordan, the 2011 National Champion, has also started to show glimpses of what he is capable of, winning a heat race at the final round of the Summer Slam, along with a solid finish in the A Main, ensuring Saturday nights action is first class.

Also in the field is Ian Brims, Dale Christensen, Tania Smith and Sam Roza on what should be a highly competitive night of competition.

Round nine of the series also signifies the second half of the series, with Gympie, Lismore, Kingaroy, two nights at Maryborough, Bundaberg and Gympie to come to round out the season.