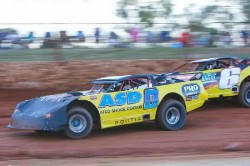 The fifteenth and final round of the Brims Concrete Super Sedan Series, supported by Think Investment Realty will be held this Saturday night at the Corbets Group, Mothar Mountain Speedway, with a thrilling finish instore to the season long series.

Justin Randall will go into the series decider as the leader, holding a slim 36 point lead over Sean Black, while Matt Pascoe is just 61 points behind. Fourth placed Wayne Randall and fifth placed Bob McCosker can mathematically still win the series, but will need plenty of things to fall their way.

The final round has attracted eighteen drivers, including nine of the top ten in the standings.

Justin Randalls consistency has paid off, as the only driver in the top four to claim points in every round, but will know he needs a strong finish to hold off Black and Pascoe to claim the coveted

The round will also mark the end of the career of Jack Childs, who will have his last drive in the series on Saturday night. Childs has been a longtime supporter of Super Sedans both on and off the track, and almost certainly the #24 will finish the series in eleventh place in the standings at the end of Saturday night.

On a big night for Sedans, Junior Sedans, Street Stock, Production Sedans and Modified Sedans will all be on the Gympie Grand Final program, with the first event scheduled for 5.00pm EST. Live Audio will also be available on Speedway Sedans Australias website (Channel 3).

Above Photo: Justin Randall in full flight, photo courtesy of Art of Speed