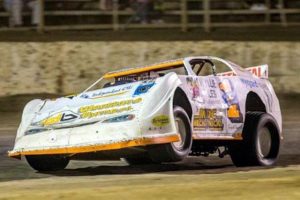 Callum Harper has won a thrilling opening round to the Super Sedan Summer Slam at the Corbets Group, Mothar Mountain Speedway, Gympie, passing Darren Kane on the outside, on the final corner to win a forty lap epic, which doubled as round five of the Brims Concrete Super Sedan Series, supported by Ford Wreckers Redcliffe.

After nine qualifying heats which saw Matty Pascoe as the only driver to win twice, the Queensland Champion would start on the front row with Steve Jordan, with Pascoe immediately jumping to the lead.

After two laps, the yellow lights came on for Daryl Moon. On the resumption, Pascoe immediately moved away from the field, leading Jordan, Sean Black, Callum Harper and Darren Kane.

Four laps into the race, Pascoe had already opened up a gap in excess of two seconds. Sean Black would move to second on lap six, moving under Jordan who a lap later dropped to fourth after Harper moved to third.

Ryan Alexander who was sixth at the time, brought on the caution lights for a second stoppage, as the young South Australian went to the infield.

Pascoe again led after the stoppage, but his lead was short lived as the Queensland Champion, and winner of the previous three Feature races, retired from the race in a ball of smoke, with a blown power steering hose.

This sensational development put Callum Harper in the lead with still twenty eight laps remaining. Sean Black looked to move under Harper in the hairpin, only to spin, causing a further stoppage, with Black sent to the rear of the field.

Harper showed great car speed, and opened a large gap on Kane, in excess of 2.7 seconds after fifteen laps. Steve Jordan was not far behind Kane, while Lachlan Onley had moved to fourth, but was a considerable distance behind Jordan.

At the half way mark, the margin extended further, peaking at 3.56 seconds on lap twenty two, before Kane narrowed the gap, as Harper who was racing at the unique Gympie circuit for the first time, got stuck in lapped traffic.

Bob McCosker was the first car that Harper had to negotiate, and as he did that, the margin between Harper and Kane narrowed markedly. Harper then was unable to pass Kyall Fisher who was in his own battle, which enabled Kane to catch Harper with eight laps remaining.

In passing Fisher, Harper was taken wide, enabling Kane to take the lead with five laps remaining. Many pundits would think that would be the end of the race, but Kane and the fans did not bank on two lap stoppages, one for Ian Brims who was turned around in the hairpin, which would cause a green, white, chequered flag finish.

In a thrilling final two laps, Harper tried to get under Kane, but was unable to do so, but in a rare move, he took Kane on the outside, exiting the hairpin in a drag race to the chequered flag, with Harper winning by 0.222.

This is a cool achievement, particularly as this was our first time around here, Harper said.

The drivers, many with some issues and damage after the opening night, will regroup for round two of the four night series, to be held on Friday night at the Fraser Shores Maryborough Speedway.