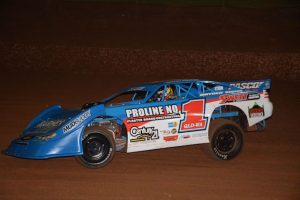 Queensland Champion, Matty Pascoes remarkable run of form continued on Saturday night when he won the third round Super Sedan Summer Slam A Main, at the Ausdeck Patio and Roofing, Archerfield Speedway, which doubled as round seven of the Brims Concrete Series supported by McCosker Contracting.

Pascoe has now won five of the seven rounds, with the opening round washed out, and was leading round five at Gympie on Thursday night when a power steering hose ended his race early.

Pascoe would lead all forty laps in a dominant display, and never looked like losing.

There were several stoppages throughout the duration, but after every stoppage, Pascoe again gained an advantage. A great battle behind Pascoe between Sean Black and Tasmanian Callum Harper, also assisted Pascoe, as Black and Harper spent nearly the entire forty laps fighting for second place, in what was an enthralling battle. This allowed Darren Kane to join the battle, and in the latter stages of the race, Steve Jordan and Ryan Alexander also chimed into the equation.

Pascoes advantage was out over three seconds for a good portion of the race in another brilliant performance, which sees the Queensland Champion in the box seat to win the Summer Slam Title.

Callum Harper meanwhile tried everything to pass Black, and the continual outside passing moves did not pay off for Harper as Kane got under Harper in the concluding stages with just 0.546 separating Black, Kane and Harper at the chequered flag. Steve Jordan, Ryan Alexander, Lachlan Onley, Wayne Randall and Darren Anning were all separated by a similar margin, with Victorian Mick Nicola finishing tenth.

Earlier the heat racing was very entertaining, with Wayne Randall winning a close encounter over Darren Kane and Gavin Northfield.

Darren Anning easily accounted for Dale Christensen and Adam Beechey in heat two, with the Tasmanian, Beechey, having his best result for the series after a horror run of bad luck to date.

South Australian, Ryan Alexander, held off Matty Pascoe and Sean Black in the penultimate heat of the night, before Steve Jordan recorded the biggest winning margin of the night, when he defeated Mick Nicola and Ian Brims by 3.390 in heat six.

The final round of the Super Sedan Summer Slam, and round eight of the Brims Concrete Super Sedan Series supported by Ian Boettcher Race Parts, moves to Hi-Tec Oils Speedway Toowoomba tonight (Sunday).